We are in the midst of Americana week in NYC, and that means some fabulous offerings at Christie’s and Sotheby’s. A few of my favorite objects in the upcoming sales:

Three fantastic Bill Traylor works at Sotheby’s. I’m partial to the man with a cane (on the right)–I love the off-center placement of the figure on the card. 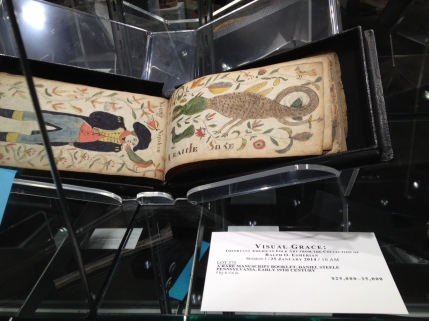 Another, quite different offering at Sotheby’s: an early-19th-century manuscript booklet from Pennsylvania. What a spectacular “Rattle Snake” with legs!

A delectable Justin McCarthy at Christie’s. I’m not usually a fan of this artist’s work, but the colors and textures on this piece really show how McCarthy internalized Impressionist ideas and made them his own. 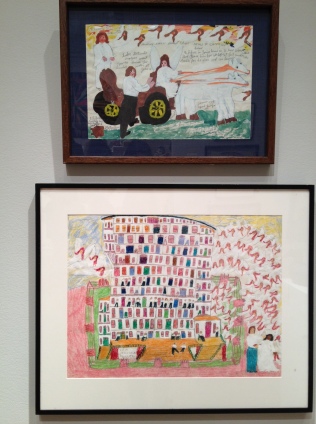 While I don’t believe that works by self-taught artists, including Traylor, McCarthy, and Morgan, should be considered “Americana,” I do believe that good art can hold its own in any number of settings. Pennsylvania German earthenware plates can live next to Bill Traylor’s modernist drawings. Sister Gertrude Morgan’s Elijah can hold interesting conversations with Chippendale tea tables.

UPDATE: The auctions went brilliantly! Works by well known outsider artists far surpassed estimates, showing that self-taught artists, and outsider art, really do have a place in the art world. The Bill Traylor works at Sotheby’s (pictured above in the original post) did especially well: the central piece, “Man with a Plow,” sold for $365,000 (inc. buyer’s fee), far above the projected 125,000-175,000. At Christie’s, a standout work was William Edmondson’s “Mother and Child,” which went for $263,000 (inc. fee). Its estimate was only 50,000-80,000. For complete auction results, check out the auction pages at Sotheby’s and Christie’s.